Writer/director Kornél Mundruczó is an artist specialising in dualities, dissonance, contradictions. His new film, the Cannes Prize Un Certain Regard-winning White God (a.k.a. Fehér isten) — which I would contend constitutes something of a masterpiece, if one’s critical barometer is receptive to unclassifiable cinema which invests in a worldbuilding and an interior logic which never lapses or negates itself — is an exemplar, an instructive example best cited, of this directorial delight Mundruczó engenders in postmodern collision. As I watched White God in a darkened theatre, increasingly aware that I was being spellbound — enacted upon — by weird forces of wonderment and repulsion, transformative images electrified by human emotion, I quickly discerned that what I was encountering was so damn unlike anything else as to be self-incarnate, envisioned in a cultural vacuum, autochthonous. This is of course ridiculous: I don’t doubt for a second that, if pressed, Mundruczó would be seized or compelled to articulate and rationalise his authorial agenda by referencing a navigable constellation of cinematic (and pop.-cultural) influences. What I mean is not that White God is anything akin to a prelinguistic or originary artefact, because such an assertion would smack of intellectual posturing and a tendency to transcendentalise a byproduct of existing cinematic traditions, but that White God feels like something entirely disenthralled with comparison.

It is the Mundruczó affect: quieten the whispering mind to the extent that it is almost as if nothing else intrudes on the canvas but the images composed and strobing there; there is a bigness of vision, an ambition of scope and an aesthetic experience which is immersive and unpolluted by the legacies of predecessors. If I had to define it, I’d maintain that White God is like Wake in Fright for children.

And yet despite the illusory emphasis of Mundruczó’s auteurist control, it can’t be denied that he revels in genre conventions. The narrative of White God is therefore a tonally amphibious one, signifying all these things: an exploitation revenge/horror film, an intimate and sweetly-felt coming-of-age drama, a racial apocalypse allegory, a phantasmagoric folktale, a character study as ideological agitprop, and — above all — an unabashed genre exercise.

What that specific genre is which Mundruczó intends to dismantle, is a little more tricky or troublesome to explicate: Mundruczó’s story is a demented fairytale or speculative fiction, set in an alternate contemporary Hungary, in which strays and street dogs are exploited, abused and segregated from the rest of society because of their status as an impure caste of “crossbreeds”, and a thirteen-year-old girl named Lili (the endearingly self-conscious and simultaneously sincere Zsófia Psotta) is separated from her pet and best friend, Hagen, a Labrador mongrel, when her estranged divorcée father, Dániel (Sándor Zsótér), a health inspector for food-grade meat contracted to a local abattoir, disowns the dog and releases him onto a vacant city underpass. For the two-hour film’s remaining running time, we are afforded near-naturalistic, nay, exclusive documentary-like access to the exploits of Hagen, the dog, as he struggles to reconcile his sudden emancipation with his newfound sense of abandonment, while also attempting to survive the night, before enduring the ownership and tutelage of crueller men. White God is therefore like a transgressive interpretation of The Adventures of Milo and Otis,  if the self-reflexive storytelling impetus for that film was to interrogate the deaths and torment and physical exploitation which those animal heroes suffered offscreen, when the cameras weren’t rolling.

And yet still White God is altogether more incisive, subversive, and more revealing of the faultlines of human empathy than mere political or humanitarian polemic would imply: It is also the story of a young girl’s fraught but impassioned efforts to recover her pet, a fantasy of repatriation, and it is the story of a creature of pure loyalty being systematically broken, a reverse-engineered A Clockwork Orange in which society exercises its appetitive and sadistic thrills on an angel to transform him into a droog.

Above all, White God roars to power in its final act, when the act of revenge catalyses the ascension of that droog on a world which rejected and disabused him. In some ways, therefore — in its visual audacity and its heartfelt rootedness in showcasing nuanced human relationships — White God reminds me a little of Bong Joon-Ho’s The Host or mid-career Spielberg, circa Jurassic Park, a throwback to an era in which people you cared about were beset upon by monsters which solicited your sympathies. There’s nothing really like it in those independent or big-budget blockbuster shibboleths littering the contemporary American cinematic landscape, anymore, because even recent revivalist examples, like Gareth Edwards’s Godzilla (or, for that matter, his incendiary pennystring-budget début, Monsters) struggle to foreground or emotionalise the monsters without humanising them. White God excels because the dogs are always dogs, and behave correspondingly in ways which cannot be reduced or delimited to human or anthropomorphic expectation.

The dogs in this film, then, are every bit as alien, intractable and ungovernable as you expect them to be, without ever jettisoning or compromising their pack logic. There is a hive-mind synchronicity at evidence in their characterisation, and Mundruczó mines this disconcerting disjuncture for the cinematographic spectacle it affords him.

He showcases sequences of wild dogs in the thrall of dominion, engaged in the zoomorphic violation of a city. It is Kubrickian in its expression of estrangement, of defamiliarisation, of dramatising the marvellous. There are dogs loping down streets in the fullness of their stroboscopic canine supremacy, mauling passersby, ransacking homes, preying on those who would seek to prevent their passage, wresting control away from the state. It is terrifying and transformative.

There’s no scene like the final scene in White God. A girl in blue, a golden horn, a population of strays come to cannibalise the contempt of men. A mutt, a leader, an encounter in fairytale vengeance. The deafening rasp of a hundred, hundred hounds panting, a girl with her outstretched hand, and all the world waiting as Mundruczó orchestrates the collision. 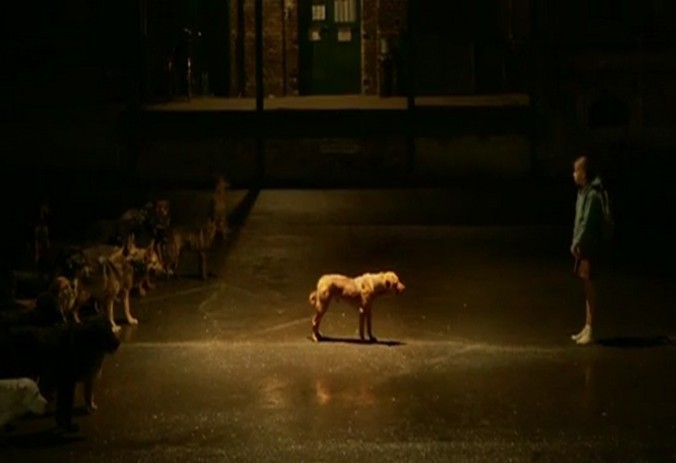